Hidden wiring horror after 95 years in the conduit - GYK91

In Issue 355 of Spirit & Speed I reported upon my search for a different car from my 1950/60's Jaguar XK's and the search I undertook before buying GYK91 a 1926 Windovers Saloon. I also wrote about the programme of work being undertaken to ensure reliability once I got it on the road.

Included in that work was the replacement of the original 95 year old wiring loom. Phil Cordery who undertook the work for me was horrified at the state of the wiring as he removed it from the car. How the car hadn't caught fire is more by good luck than anything else. The main wiring on a 20hp is contained in a steel conduit which runs from the battery under the rear compartment of the car to the under-bonnet fuse box. Not only had numerous bits of wiring been added over the years but often it had simply been wound together and taped up. The real horror story though emerged when Phil removed the wiring from the conduit. Bearing in mind that insulation 95 years ago was rubber, many parts of the wiring had no insulation at all, it had simply perished and fallen off the cable and this was inside a metal conduit which naturally was earthed.

Not only was the conduit removed but it was replaced with a slightly larger diameter plastic conduit, this enabled extra cables to go through it for the likes of indicators etc, as well as being safe. The new cables in the loom had modern insulation but retained the correct colour patterns.

Since the report in Spirit & Speed it has come to light that at least two pre-war Rolls Royce cars have caught fire due to shorting of the cables in and around the conduit, in both cases original wiring was involved. Fortunately in both reported cases the fires were quickly put out, but how different it could have been isn't worth considering.

It is imperative that if your car hasn't been re-wired recently despite how good it might look, remembering that you cannot see inside the conduit, it must be essential work urgently considered. No one wants to have to tackle a wiring fire in a car, least of all one with a wooden frame and petrol.

See also the separate updated article in this section of the website. 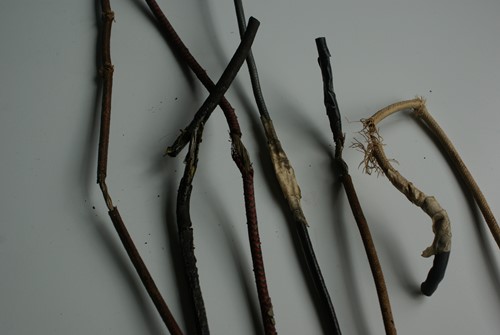